8 Tips On How To Write Headlines That Make People Click

It doesn’t matter how great your content is—if it has a boring headline, no one will click on it.

There has been a lot of chatter in media recently about the power of headlines and whether or not the content itself fulfills the high expectations levied by powerful headlines.

Great headlines should be accompanied by great content—that should be your first and foremost priority.

But if you’ve written a great piece and you’re looking for tips on writing a headline that engages people, you’ve come to the right place.

We have eight tips to help make sure you write headlines that make people click.

1. The element of surprise.

Does your headline have the element of surprise?

Surprise or how surprising something is, is often listed as something that really makes a concept stick in the mind of the reader.

It pulls them out of the expected pattern and gives them something new to think about. This is something you want your headlines to do.

You want them to surprise your reader into thinking about the concept you’ve presented.

They’ll see your article or blog post and want to click on it because the surprise generated interest.

Using a buzzword, especially in a way that’s likely to cause some controversy (like, “Why Stricter Gun Control Will End Gang Violence”), also draws big clicks, if it relates to your industry.

Does your headline pose a question?

We as humans are specifically conditioned to become curious when we hear or read a question.

While you still want your headline to represent what your post is about, you’re much more likely to attract clicks if it’s in the form of a question being posed to the reader.

If you haven’t, you likely aren’t spending enough time on Facebook – which isn’t necessarily a bad thing.

They are the masters of the curiosity-inducing headline (and have caught some serious flak from some factions of the internet for writing headlines that just don’t pay off when you get to the actual content or which are just manipulative).

The right headline should induce a feeling of deficiency of knowledge.

It will present some information, while holding enough back that the only way the person can find out what happened is to click on your link.

In giving correction or rules, we usually try to avoid negative words like never, don’t, and worst.

Some people theorize that the consistent use of superlatives in our everyday lives—like saying “great!” automatically when someone asks how our day was—gives these positive words less power.

On the other hand, people are less willing to use negative superlatives on a regular basis.

People are much more likely to click on headlines like “Six Things You Should Never Say to a Child,” to see if they are doing something they shouldn’t.

5. Explain how to do something.

Even if your blog isn’t written specifically in a step-by-step “how to” format, if it demonstrates how or why to do something, you can make use of this headline.

Anything that uses “How to,” “DIY,” or “Get Started,” is likely to draw clicks.

People like clean, precise information that they can immediately use, and that’s what one of these headlines indicates.

People love to see numbers in their headlines.

Why? Because they indicate quantifiable facts or evidence.

A number also indicates that the information will be in a list format, which is easier to read and digest than large blocks of text.

Numbers play on our innate love for order, so when we see them in a headline, we usually feel comforted by the knowledge that this post will have structure.

The first headline tells us what to expect, the second is too unpredictable to inspire the same kind of confidence.

Obviously, all of the writing you do is for the reader—but do you ever directly address that reader?

The newest generation of consumers, the much-discussed millennials, like to know how something relates directly to their own lives.

Writing from a second-person standpoint (that is, using “you,” “we,” and “us”), makes the reader feel as if the content is written specifically for them.

In that same vein, if you can find a way to tell the audience specifically who the blog or article is for, your ideal audience will read that headline and think, “That’s me,” and be far more likely to click on your headline.

Tell them who stands to gain (and maybe even what they stand to gain) from reading your content.

The clearer a headline is, the more likely a person is to click on it.

While oblique references might be amusing to those who understand them, specific, clear headlines are preferred for blogs or articles that are for the masses and not just for a narrow niche of people.

Again, numbers are one way to make the headline specific, as are examples, names, and titles.

As a note, keep in mind that people also like variation and change. Don’t just pump out headlines that are facsimiles of one another. 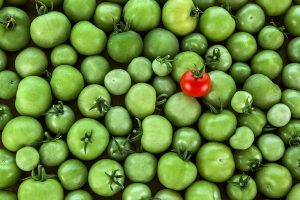